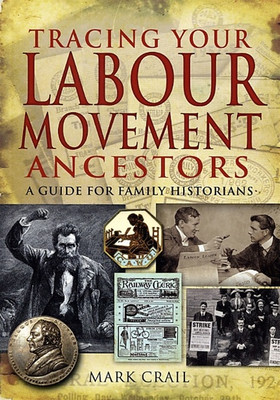 Tracing Your Labour Movement Ancestors: A Guide for Family Historians

If you want to find out the life of an ancestor who was involved in the labour movement or was a union member, this handbook will be fascinating introduction to the subject. Mark Crail provides a graphic and authoritative account of the history of the labour movement in Britain from the early
nineteenth century to the modern day.

He gives a vivid insight into the key stages in the development of labour relations - the battles fought by labour movement pioneers, the formation of the
first unions, the influence of Chartism and the early socialist societies, the rise of the Labour Party and other left-wing groups, and the impact of organised
labour workers' lives as ordinary people gradually won the right to vote over the course of 200 years.

At the same time he describes in detail the various books, museums, archives, websites and other resources that researchers can use to explore labour history for themselves and to uncover the careers and experience of their ancestors.

A mass of information is available relating to individuals and to labour history in general, and this handbook is an invaluable guide to it.

Contents:
Preface
Arrangement
Acknowledgements
1. Understanding Labour Movement Records
2. From Illegality to Uneasy Acceptance 1800-1850
3. From New Model Unions to the New Unions 1851-1900
4. The Rise to Power 1901-1945
5. From Fifth Estate to Enemy Within 1945-1997
6. Chartism: The First Workers' Movement
7. The Labour Party and its Forebears
8. Left March: The CPGB and Other Organosations
9. The Labour Movement at Prayer and Play
10. Elections and the Franchise
Appendix 1. The Rise and Fall of Trade Union Membership
Appendix 2. Chronology of the Labour Movement
Bibliography
Index