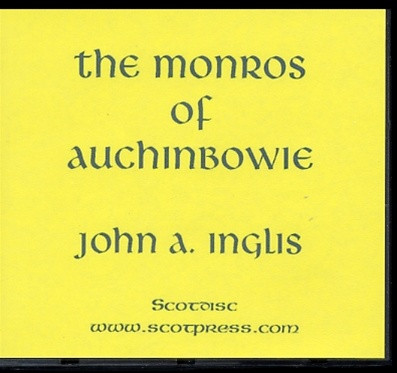 The Monros of Auchinbowie and Cognate Families

This 237 page book written by John Alexander Inglis in 1911 was to "trace and arrange as accurately as possible the historical material relating to a branch of the Monro family, which I have called for convenience the Monros of Auchinbowie.'"
He begins with the early history of the Monros: Sir Alexander Monro of Bearcrofts; Col. George Monro of Auchinbowie; Sir Donald MacDonald of Sleat, whose daughter married into the Monros; the three Professors Alexander Monro who in sequence established the intellectual credentials of the Monros; John Monro advocate; and then the family of David Monro Binning. The second Professor Alexander Monro married into the Binning family, and it was their younger son David who inherited the name and property of William Binning, who died without direct heirs. The Binning family's genealogical and historical information therefore is included in substantial detail.
The last five chapters deal with the Binnings of Wallyford, the Scotts of Bavelaw and of Harperrig, the Boyds of Kipps and of Temple, and the Montgomerys of Broomlands. There is substantial historical as well as genealogical information on these associated families.