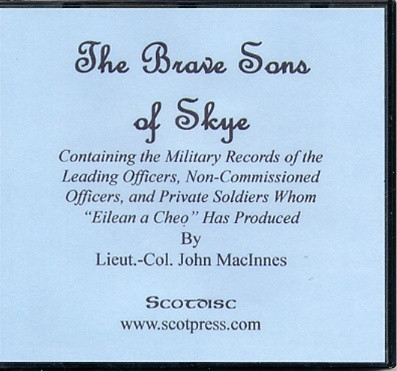 The Brave Sons of Skye

The full title of this book is "The Brave Sons of Skye: Containing the Military Records of the Leading Officers, Non-commissioned Officers, and Private Soldiers whom "Eilean a Cheo" has produced"

The list includes not only distinguished high-ranking officers, but also enlisted men whose valiant deeds had become part of imperial lore. For many of these individuals, there is extensive historical and genealogical information, and the whole is a thorough account of those men who left Skye to take part in the great imperial adventures of the British military in North American, in India, and throughout the world.