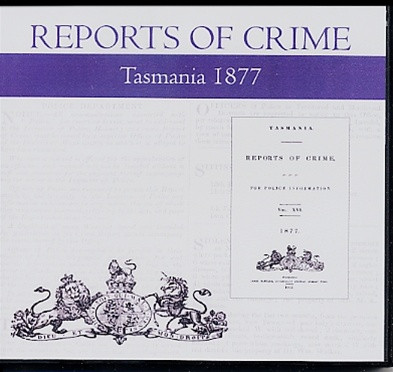 Far from being just a unique and extremely fascinating resource for local, family and social historians - the Police Gazettes are useful for anyone with an interest in Tasmania in the 1870s. The CD contains all issues that were released during that year.

Missing Friends
Information is requested respecting a woman named Mary Ann Adams, who was transported from Surry, England, about 32 years ago. She subsequently married in this Colony a convict names William Neigheny. Communicate with this Office.

Containing high quality scanned images of the whole years worth of issues, this CD has been bookmarked for easy navigation, and pages can be searched, browsed, enlarged and printed out if required.

ALSO AVAILABLE AS AN EBOOK:
Tasmania Reports of Crime 1877