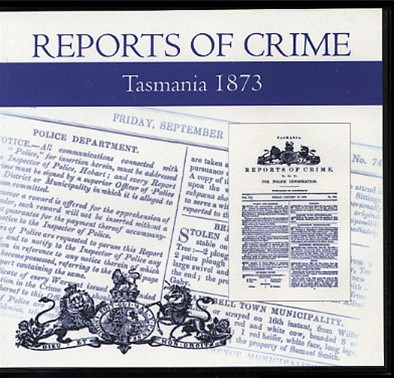 In this years' issues you will also find "Return of Paupers Discharged from Invalid Depots". These list the persons name, ships, district admitted, date admitted and discharged, and remarks.

Issued weekly, these are a goldmine of information for any historian (family history, local history or social history). Containing the names and dates of many thousands of people and events that occurred throughout 1873, finding information in here can help piece together stories in your family history.

Inquests
An inquest was held on the 13th instant, at Melton Mowbray, before Alexander Finlay, Esquire, Coroner, on the body of James David, per William Jardine, F.S. Verdict:- "Accidentally killed on the 9th May instant, by being run over by a stage coach at Lovely Banks in Tasmania."

An inquest was held at Launceston, on the 6th instant, before Thomas Mason, Esquire, Coroner, on the body of Richard Markham, aged 29 years, F.C., per ship Hector. Verdict:- "Accidentally drowned."

An inquest was held at Launceston, on the 17th instant, before Thomas Mason, Esquire, Coroner, on the body of Honora Dean, aged 38 years, F.S., per D. Northumberland. Verdict:- "Died from natural causes, to wit, heart disease."

Released on fully-searchable CD-ROM, using these valuable documents has never been easier. The CD contains high quality scanned images of the whole years worth of issues. This CD has been bookmarked for easy navigation, and pages can be searched, browsed, enlarged and printed out if required.

ALSO AVAILABLE AS AN EBOOK:
Tasmania Reports of Crime 1873