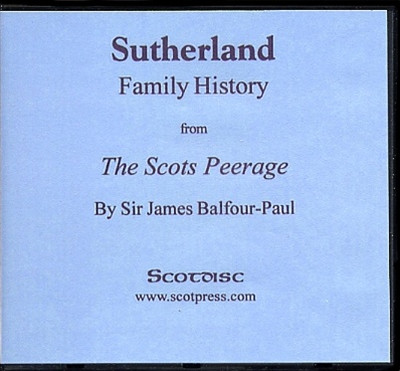 Here are presented the genealogical and historical records of all branches of the Sutherland family holding titles of nobility that is included in Sir James Balfour-Paul's monumental work "The Scots Peerage".
The Sutherlands began their progress to title and fortune as Flemish settlers in Scotland, and gradually acquired the titled of Lord Duffus and Earl of Sutherland. This is a genealogical account of those two branches of the family, up to the early 20th century.

This CD consists of scans of the whole of the original articles relating to this family, which can be browsed, enlarged and printed if required. Please note: it is not searchable.