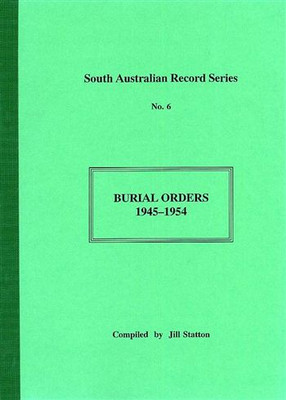 Burial Orders included in the records vols 5 & 6 are for people who died suddenly or in public places, or whose deaths were brought to the attention of the Coroner, but were not subjected to an Inquest or Autopsy. The order by which the body was released for burial (or cremation) was called a Burial Order. These Burial Orders cover a much later period than the Coroner's Reports (Nos. 1 & 2 in this series). They cover the entire State (including some from NT). Information includes date and place of death, age, residence, occupation, marital status and occasionally date of birth. There are some gaps in the records but the two volumes give nearly 10,000 Burial Orders in total.