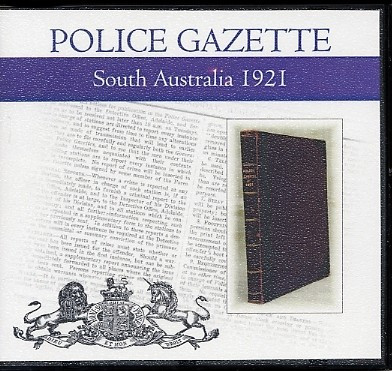 What information can be found in a South Australian Police Gazette?
The information contained in the Police Gazettes does vary a little from year to year, but overall you will find details of any changes within the police force which are all listed (promotions, demotions, discharges, resignations, deaths), information is also given on housebreak-ins, robberies, arson, murders, rewards, warrants issued, lists of arrests and discharges, lost horses and cattle, deserters from services and from families, escaped prisoners, missing friends, inquests, lost and found items, and reports on those released. Notices from interstate police gazettes are usually included if it was felt that the person may be heading towards that state.

How can this help me?
Anyone researching their family will have a 'lost' family member or two! You may well find them listed here, being on either side of the law. Or maybe they were a Policeman who transferred to another department or division, or someone that was a victim of a crime. You can find the physical details on persons listed here, missing, wanted or released, which helps to paint a picture of them (name, aliases used, age, height, colour hair, colour eyes, distinguishing features, even colour of their clothing when last seen).

Far from being just a unique and extremely fascinating resource for local, family and social historians - they are useful for anyone with an interest in South Australia in 1921. The CD contains all issues that were released during that year.

Special Inquiry - Murder
Special inquiry is requested to locate one Frank Dalton (correct name Edward Francis Dalton, alias Frank Carlton, alias Charles Murphy), who is wanted by Sheriff J.W. Hoggatt, Cowlitz County, Kalama, Washington, U.S.A., for murder. Description:- 33 years of age, 178lbs. weight, 5ft.. 11 1/2in. high, dark complexion, dark hair, hazel eyes. He enlisted at Adelaide, on February 2nd, 1915, and embarked for active service abroad on April 20th of the same year, being attached to the 10th Infantry Battalion. He was subsequently transferred from the battalion in France to the Anzac Provost Police Corps, England, and later promoted to the rank of corporal, but on October 24th, 1918, was reported as an illegal absentee, and has not since been heard of by the military authorities. His wife and two children reside at Murray Bridge., but they have not heard from him since March, 1918. A passport, No. 5783, was issued to him at Portland, Oregon, U.S.A., on March 17th, 1921 and it is thought that he will return to Australia. A reward of one thousand dollard is offered for his arrest. If located in South Australia, keep under surveillance, and communicate with Detective Office, Adelaide, where his photograph is filed. Vide P.C.C. 964/1921.-(C.2335)

This years worth of issues has some features which include: