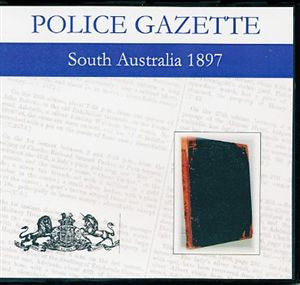 The Police Gazettes are an incredibly unique source of information, simply because they were designed to be distributed amongst the Police Force only, and the information contained often cannot be found anywhere else.

Issued once a week, this CD-ROM is a compilation of all of the issues of the South Australia Police Gazette that were issued 1897. Each issue is generally four pages long, and contains information such as court lists, lists of warrants issued, appointments and changes in the Police Service, lists of arrests and discharges (which include descriptions), escaped prisoners, and missing persons. Murders, arson, house-breakins, robberies, lost and found items, missing horses or cattle, and more are also included. Notices from Police Gazettes from other states are also often included.

Inquests
At the Moonta Mines Institute, the 9th instant, on the body of Thomas Thomas, who was killed at Moonta Mines on the same day through being encircled around some machinery by a wire rope at which he was attending. Verdict - "Accidental death, there being no blame attachable to anyone".

This product is a fascinating read for those researching South Australian history, and it makes information that is difficult to find easily accessible on fully searchable CD.