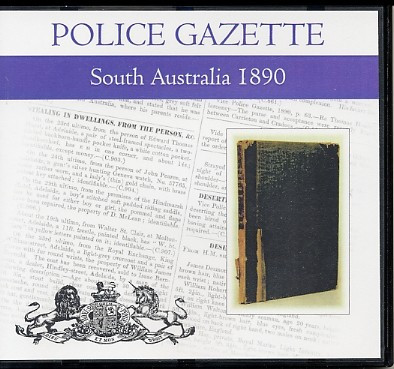 If you had family living in South Australia in the 1880s-1890s, have you thought of looking at the Police Gazettes for information? These are a unique, useful and extremely fascinating resource for local, family and social historians. Compiled to be distributed amongst the Police Force only, these Gazettes contain fascinating details and information that can not be found anywhere else.

This CD-ROM is a compilation of the 53 issues of the South Australia Police Gazette that were issued 1890. Each issue is usually four pages long, and contains information such as court lists, lists of warrants issued, appointments and changes in the Police Service, lists of Justices of the Peace, lists of arrests and discharges (which include descriptions), escaped prisoners, and missing persons. Notices from Police Gazettes from other states are also often included.

Stealing in Dwelling, from the Person, &c.
Bank Robbery - £200 Reward
Stolen from Alfred Haysom, in the Commercial Bank, Adelaide, about 2.50 p.m., 31st ultimo, two thousand six hundred and thirty six pounds (£2,636), all in Commercial Banke note, Adelaide register, made up as follows, and the property of Cornelius Proud:- Forty-three (43) £50-notes, six (6) £20-notes, twenty-five (25) £10-notes, twenty-three (23) £5-notes and one (1) £1-note. Haysom had placed the bundle of notes (with other money) on the bank counter; a man, of whom he took no notice, told him that he had dropped some money on the floor. On looking down he saw two £1-notes (which did not belong to him and had evidently been placed there for the purpose of attracting his attention); he picked them up, and on turning to the counter, missed the bundle of notes. About the same time two respectably dressed young men were seen running away from the bank. The following is a list of all the £50-notes on the Commercial Bank, Adelaide register, in circulation, and amongst them are the forty-three stolen notes: [serial numbers written here - excluded for this extract]
A reward of £200 is offered for the apprehension of the offender of offenders and the recovery of the money, or the principal part thereof, or for such information as will lead thereto.-(C.473.)

This CD contains high quality scanned images of the whole year's worth of issues, and has been bookmarked for easy navigation. Pages can be searched, browsed, enlarged and printed out if required.