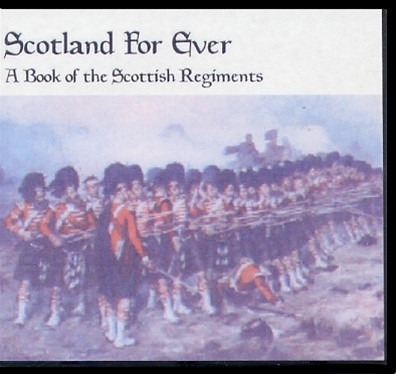 Scotland For Ever: A Book of the Scottish Regiments

Published approx. 1914-1918 in London, by Hodder and Stoughton, with a Preface written by the Earl of Roseberry, this is one of the most sought-after of all the Scottish military books. It is a comprehensive study of the Scottish regiments, from the wars of the 17th century, when many of the regiments were first raised, through campaigns in Flanders and Germany, North America and the West Indies, and on to the true glory days of the regiments  the Napoleonic Wars, the Crimean War, and the extended stay in India.

Of particular interest and importance are the 15 full-color illustrations, depicting uniforms of the various regiments and the famous portraits of the battles where the Scots won their fame and glory Fontenoy, Alexandria, Waterloo, Alma, Kandahar, Tel-el-Kebir, and, of course, "The Thin Red Line" at Balaclava. All in all, this is a superb addition to your military library.

This CD can be browsed, zoomed-in or zoomed-out, and printed if required. Please note: it is not searchable.