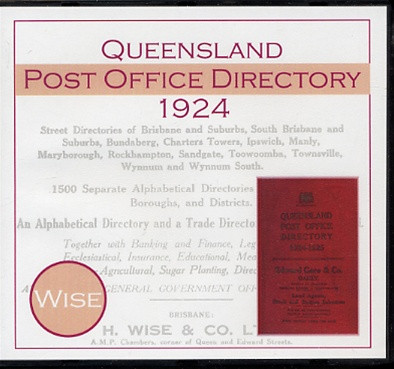 Directories are an invaluable resource for local, family and social historians as well as for researchers in other fields of Australian history. While they do not give you birth, death and marriage details - core records for genealogists and family historians - they can certainly provide you with information on the region where your ancestors lived, as well as information on their occupation and much more.

This large Wises directory for 1924-25 is comprehensive in its coverage. It contains the following directories:

This directory contains hundreds of thousands of people, many with occupations and addresses and gives insight into the start of the third decade of 20th century Queensland.

SYSTEM REQUIREMENTS:
This CD contains high quality scanned images of the original book, and has been bookmarked for easy navigation. Pages can be searched, browsed, enlarged and printed out if required.