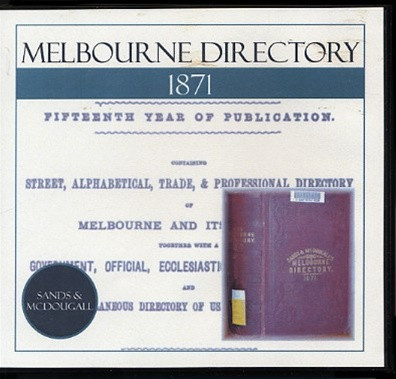 The Sands and McDougall directories are not only one of the best known of the Australian directories, but also the most comprehensive. Directories are one of the most effective ways of tracing members of a family, especially tradesmen. Many small businesses needed to ensure the public was aware of their activity and one of the better ways to do this in an age before media dominated was via a
directory.

Other useful mini-directories included, provide the names and positions of hundred of people, in the following occupations or positions:

Users should always refer to the display advertisements because not only do they give you a sense of the era, but they often provide names and addresses.

The whole directory, including most text in the ads, is searchable. This makes it useful not only for finding names, but also places, occupations and other information for family and local historians.