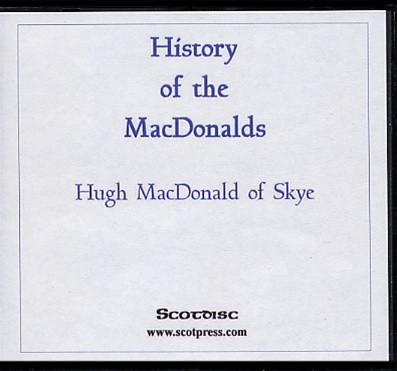 History of the MacDonalds

Taken from 'Highland Papers' and edited by J.R.N. MacPhail, this was originally published in 1914. Now this title has been republished as a facsimile for the first time on CD-ROM.

The second portion of this compilation provides documents which illustrate passages in the history and which, therefore, provide auxiliary information relating the family to the history of the Highlands and to the interaction with both Edinburgh and Rome. Included are marriage dispensations, papal mandates and letters, petitions, and extracts from acts of parliament relating to the Donalds and to Skye. In addition, there is a genealogical chart of the Lords of the Oirir-Gael from Somerled down to the time of Robert II.

This CD consists of scans of the original books, which can be browsed, enlarged and printed if required. Please note: it is not searchable.

Contents:
Introductory Note
History of the Macdonalds
Documents Illustrating Passages in the History
- 1. Dispensation for marriage of John of the Isles and Amie, sister of Reginals MacRuari, 4th June 1337
- 2. Indenture betwixt John, Lord of the Isles, and John of Lorn, Lord of Argyle, 1354
- 3. Mandate to absolve from excommunication Lachland, son of John 'M'Guilleon' and Nary, daughter of John of the Isles, and to grant a Dispensation for their marriage, 13th May 1367
- 4. Extract from the Acts of the Parliaments of Scotland, 1389
- 5. Papal Mandate to the Bishop of Ossero to inquire into certain matters relating to the Monastery of St Columbia, in Iona, with powers, 1444
- 6. Papal Letters of Legitimation in faour of Hugh, Alexander, and Donald, sons of Alexander, Earl of Ross and Lord of the Isles, 1445
- 7. Papal Mandate to admonish Alexander, Earl of Ross and Lord of the Isles, and Christina, his Concubine, 1446
- 8. Carta confirmationis super carta Johannis Domini Insularum facta suo fratri Hugoni Alexandri de Insulis, 1495
- 9. For Donald Gorrum his petitioun and clame gewin in to the checker penult, July 1596
- 10. Donald Gorme his genealogie from Hugo Alexander