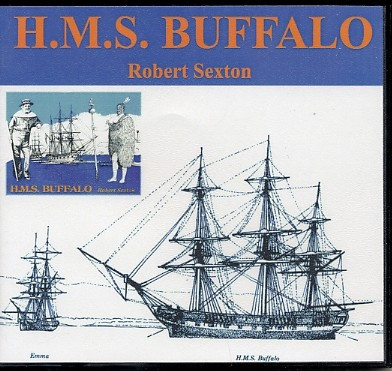 The year 2006 marks 170 years since the founding of South Australia in 1836, and the 28th of December is the anniversary of the arrival of H.M.S. Buffalo under the command of the first governor, Captain John Hindmarsh.

The ship is remembered as a symbol of the colonising fleet, but just as the fame of the Beagle does not rest on being the first naval ship to enter Port Adelaide, the Buffalo's significance extends far beyond this one voyage.

Built as a merchantman in Calcutta in 1813, the Buffalo was purchased into the Royal Navy for use as a storeship during the Napoleonic wars. After service as a quarantine ship, she made three voyages to New Zealand for spars, calling regularly on the way at Rio de Janeiro and Sydney, and also visiting Quebec, Albany, Adelaide, and Hobart.

The unusually wide variety of passengers carried - emigrants, troops, convicts and government officials - has left a number of accounts which supplement official records to give a clear picture of the ship, naval routine, and conditions on board for travellers. In addition, we learn of events ashore in Australia, Britain, Canada, Brazil and above all in New Zealand.

The various accommodation and deck plans of  the Buffalo provide a rare record of large Indian-built ships of the day, as well as giving precise details of the modifications necessary to fit the ship to carry naval stores, or to take the passengers which have proved to be her most significant cargo.

SAMPLE FILE:
Click here to download a file of sample pages from this book
Right click on the link and select "save as" - to a location on your hard drive. The sampler can be opened, navigated and searched as with the full CD file/s.
Sample files usually contain the title page, contents, some introductory pages and sample pages from the body of the book. Often the complete index from the original book is included.