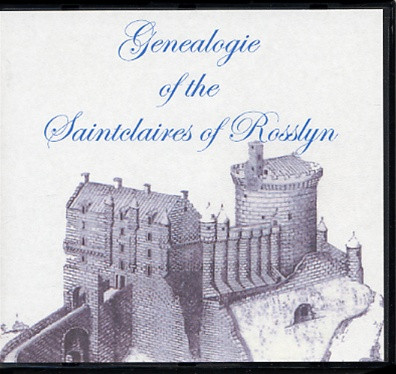 Genealogie of the Sainte Claires of Rosslyn

Father Hay, Prior of St Pieremont, acquired a particular interest in Rosslyn Castle and in the Sinclairs of Rosslyn through the second marriage of his mother, Jean Spotswood Hay, to James Saintclair of Roslyn. Through this marriage Hay acquired access to the muniment room of Rosslyn and from those records, often inaccurately copied, he compiled a genealogical history of this ancient family and of its association with office of Grand Master Mason of Scotland. This office was thought hereditary in the family from the time of King James II, but upon the death of William Saintclair on 4 January 1778 without male heirs the office was vacated by the Saintclairs. Whether the office indeed was given to the Sinclairs at that early date is one of the issues in debate in this history. In 1736 William St. Clair resigned into the hands of the Scottish lodges the right to nominate their own Grand Master. This work, though, is a more extensive genealogical history of the larger Sinclair family and of its association with Rosslyn and the succession to the estates upon the death of William Saintclair. Of greater importance than these earlier genealogical disputes were Hay's descriptions of the Chapel and Castle. Included as well is bibliographical information on published works which show engravings of the chapel and castle.