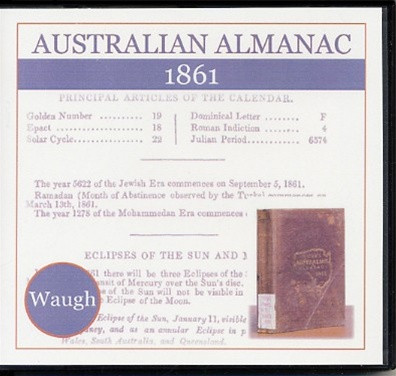 Published by James W. Waugh, this Almanac is titled 'Australian', but it is primarily about New South Wales, and is divided into several sections, the first section (the Almanac) contains miscellaneous information such as a calendar for the year, which includes gardening information as well as moon phases. The section titled "Australian Topography" gives information on on the early explorers of Australia, which the "Acts & Ordinances" gives details of all Acts etc that were passed in Parliament during 1859 and 1860. This is followed by 18 pages of "Notes of Cases' thats were decided in the Supreme Court of New South Wales. The dates for the cases range from 1859-1860.

The second section is the "Government" section. Listed first here is details of the English royal family, the government, the army, this is followed by details of the Australian colonies together with their governments, the executive and legislative departments, and the law departments of New South Wales.

The third section contains literally thousands of names - ideal for historians and genealogists, as it list those in New South Wales who were in the following (generally those with higher-ranked occupations are listed):

Part three is the most interesting, as it contains details on the companies of the time, together with details of those who headed them up. There are details on Insurance and Banking companies, Public Institutions and Societies, the Commercial Register, Steam Navigation Companies, city and suburban local government, military establishment, Masonic Lodges, Police Districts, Peninsular and Oriental Mail and Post Offices.

The last section, but no less useful, contains 60 pages of advertisements for local businesses.

This product provides a great tool for researching New South Wales history making information that is difficult to find easily accessible on CD. Fully searchable, this CD has been bookmarked for easy navigation, and pages can be searched, browsed, enlarged and printed out if required.