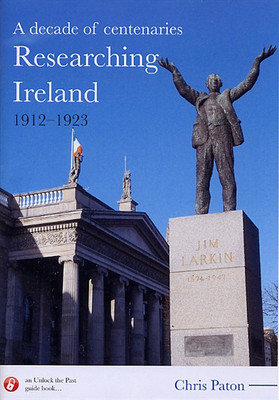 A Decade of Centenaries: Researching Ireland 1912-1923

Publisher: Unlock the Past

As the issue of Home Rule reared its head for a third time, its supporters and detractors raised militias to defend their positions, whilst women fought for the vote and labourers fought for better terms from their employers. The First World War would soon dramatically change everything, leading some to see England's difficulty as Ireland's opportunity. When an independent republic was proclaimed through force of arms at Easter 1916, the response would see a brutal guerilla war fought between the British forces, the Irish republicans, a partitioned island, and a nation divided.

A century on, in this book from Unlock the Past, Northern Irish born family historian Chris Paton will help you discover whether your ancestors were caught up in the events of that period - whether they were Suffragettes, unionised workers, Ulster or Irish Volunteers, fighting with the British Army and Crown forces, against them as rebels and revolutionaries, and in the ensuing civil war on both sides of the Treaty divide. With improved cataloguing by archives, and better access to the records, both online and offline, a new gateway has been opened into one of the island's most tumultuous, tragic, exciting, and utterly desperate periods of the 20th century. In this book he will show you how to step through it.