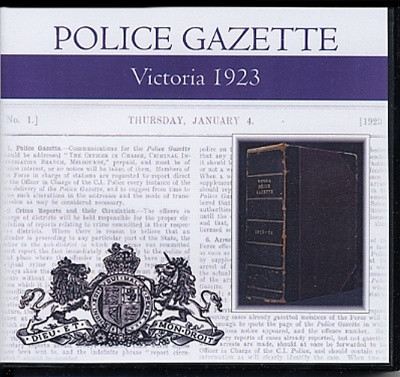 Police Gazettes are a unique, useful and extremely fascinating resource for local, family and social historians and researchers in other fields throughout Australia. Compiled to be distributed amongst the Police Force only, these Gazettes therefore contain details and information that can not be found anywhere else.

They include court lists, lists of warrants issued, appointments and changes in the Police Service, lists of arrests and discharges (which include descriptions), escaped prisoners, and sometimes missing persons. Notices from Police Gazettes from other states are also often included.

Usually issued weekly, here collected together on the one CD is the whole of the 1923 years worth of issues

High quality scanned images of the whole of the years worth of issues. This CD can be viewed by any computer using Adobe Acrobat Reader (version 4 or later recommended). The data on this CD is completely self-contained, and requires no installation. The entire text is searchable.