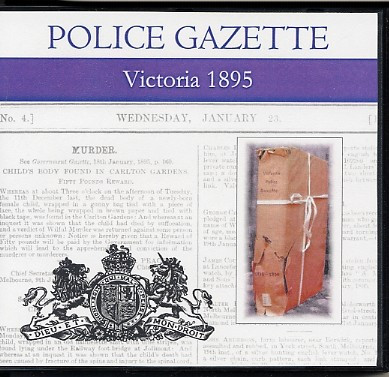 So you've heard of Police Gazettes? But just what are they? These were weekly publications which were distributed among the Police Force, and included information on all sorts of happenings within the state of
Victoria.

Far from being just an immensely as well as fascinating resource for local, family and social historians, the Police Gazettes contain details and information that can not be found anywhere else. As well as listing those in the police force with promotions, demotions, resignations, dismissals, deaths etc. Also details on rewards, housebreak-ins, robberies, arson, murders, inquests, lost horses and cattle, deserters, escaped prisoners, missing friends, lost, found and stolen items, reports on those apprehended and discharged, and so much more. Notices from interstate police gazettes are often included.

This is a valuable resource for all who are researching their Victorian connections, and it is now on fully-searchable CD-ROM for the first time.
This CD contains high quality scanned images of the whole years worth of issues. It has been bookmarked for easy navigation. and pages can be searched, browsed, enlarged and printed out if required.