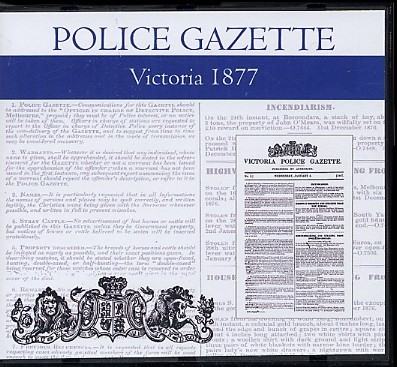 If you had family living in Victoria in 1870s, have you thought of looking at the Police Gazettes for information? These are a historian's goldmine of information. Compiled to be distributed amongst the Police Force only, these Gazettes contain details and information that cannot be found anywhere else. Far from just listing those who were in the Police Force, or those that were on the wrong side of the law - you will also find entries of missing persons, witnesses to crimes, victims, and much more.

You also get weekly information on housebreaking, robberies, arson, murders, lost horses and cattle, deserters, escaped prisoners and reports on those released ... as well as some information from interstate police gazettes.

Example entry taken from the 10 January 1877 issue:
JAMES T. BROWN is charged, on warrant, with deserting his wife at Collingwood last October. Description:English, carpenter, 45 to 50 years of age, 5 feet 9 inches high, darkbrown hair turning grey, brown beard, whiskers, and moustache, also turning grey. He is supposed to be about Melbourne, having arrived from Wagga Wagga on the 24th ultimo. Offender has been twice before the Collingwood Bench for a similar offence.-0.103. 9th January 1877.

Example entry taken from the 4 July 1877 issue:
MISSING FRIENDS.
INFORMATION is requested of John Thompson Duley, who left Sydney in June 1875 for Melbourne, and underwent six months imprisonment in Melbourne, the same month, for being a stowaway on board the s.s. Northumberland, bound for England.
Description:- 40 years of age, 5 feet 10 inches high, dark complexion, dark hair and eyes, long beard. An engineer by trade and was propounding a new motive power.-0.3991. 29th June 1877.

This product contains high quality scanned images of the original gazette. It has been bookmarked for easy navigation. Pages can be searched, browsed, enlarged and printed out if required.