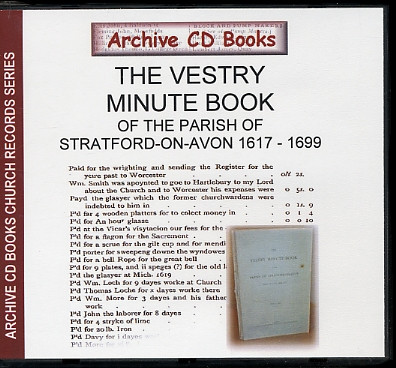 An invaluable resource for those studying the history of Stratford-on-Avon, and those with ancestors in the town during the 1600s. This book contains the minutes of meetings of the parish and its affairs.

It starts in 1617 with a levy on the residents of the town towards the repair of the church, and a list of all those who paid, including one Richard Hathaway. In 1618 we see a list of householders again with the amounts they paid in taxes. All accounts are included, with amounts paid to local tradesmen for various services and goods thoughout the period. "Item payd Thomas Hornby for woorkemanshipe for makinge hookes and hinges for the pulpit. 2s." "Receved for a grave of Humfrie Wheler, 6s 8d". There are thousands of entries like these. Everything from "cleaning and whitinge the churche" to purchase of yew trees for the church yard.

Other matters include the selection of churchwardens, overseers of the poor, excommunication of residents for refusing to pay the church, etc.

It is a pity that the book of minutes does not begin a few years erlier, so as to cover the last years of Shakespeare, but the people whose names appear are Shakespeare's contemporaries, and the words and spelling were those in use at the time.

A wonderful insight into the life of the parish in the seventeenth century. A wealth of information and a snapshot in time.