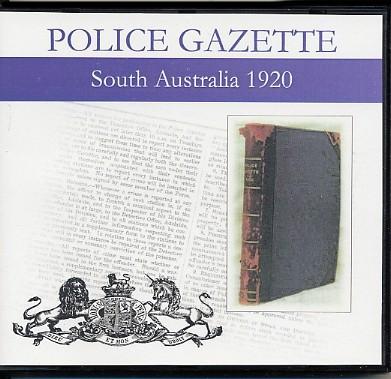 Compiled to be distributed amongst the Police Force only, Police Gazettes contain details and information that can not be found anywhere else.

They include court lists, lists of warrants issued, appointments and changes in the Police Service, lists of arrests and discharges and descriptions, inquest verdicts, lost or stolen items, deserters, housebreak-ins warrants issued or cancelled, escaped prisoners and missing persons, as well as those released. Notices from Police Gazettes from other states are also often included.

Inquests
On the 20th instant, at Adelaide, on the body of Vera Maud Bassett, aged 22 years of age, late of Gorge Road, Thorndon Park, single woman, who died at her late residence, as above, on the 16th instant. Verdict - "I find that the deceased came to her death at Thorndon Park, on the 16th day of April, 1920, from peritonitis consequent of a miscarriage induced, but the evidence does not show by whom."

Fascinating searching and useful information for anyone interested in South Australia's history and people.

Now searchable, these Gazettes on CD-ROM open up a world of interesting and comprehensive information about individual people and their lives in South Australia.