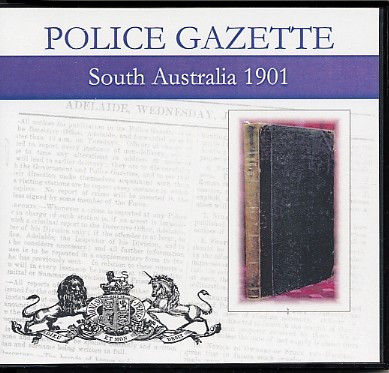 So you've heard of Police Gazettes? But just what are they?
These were weekly publications which were distributed among the Police Force, and included information on all sorts of happenings within the state of South Australia.

Far from being just a unique, useful and extremely fascinating resource for local, family and social historians, these Police Gazettes contain details and information that can not be found anywhere else. As well as listing those in the police force with promotions, resignations, commendations etc, you will find information on courts lists, arson, murders, deserters, lists of those arrested and discharged, warrants issued, escaped prisoners, missing persons, details of lost and stolen items (and from whom), apprehensions and more. Notices from police gazettes from other states are also often included.

A fascinating read for learning about the social history of the time, even if you don't have family there - this CD contains all issues that were produced in 1901.