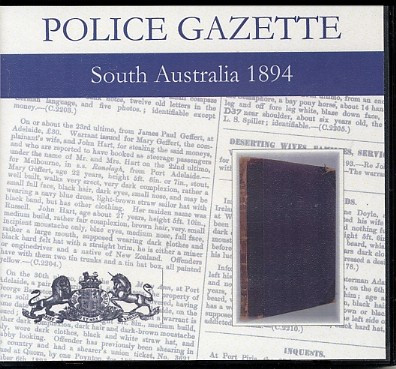 If you had family living in South Australia in the 1890s, have you thought of looking at the Police Gazettes for information? These are an historian's goldmine of information. Compiled to be distributed amongst the Police Force only, these Gazettes contain details and information that can not be found anywhere else. Far from just listing those who were in the Police Force, or those that were on the 'wrong side' of the law - you will also find entries of missing persons, or they might be a witness to crime, or they may have had something stolen from them, or they may even have found an item, and reported it to the Police.

Issued once a week, you still get information on the housebreak-ins, robberies, arson, murders, lost horses and cattle, deserters, inquest verdicts, escaped prisoners and reports on those released ... as well as some information from interstate police gazettes ... and so much more. This CD-ROM contains all issues that we released during 1894.

Inquests
At Mount Gambier, the 30th ultimo, on the body of Walter Wallace, who died the previous day. Verdict- "That the deceased came to his death by eating poisonous fish."At Adelaide, the 28th ultimo, on the body of a female infant, name unknown, found in the branches of a tree on the South Park Lands on the previous day. Verdict- "Death from exposure and neglect."
At Adelaide, the 31st ultimo and the 2nd instant, on the body of Charles Carpenter, who died on the 30th ultimo. Verdict- "Accidental death, through falling from a ballast truck' no blame attachable to any person."