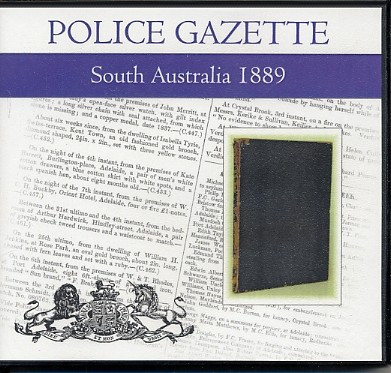 An often unused source of information in research is Police Gazettes. The reasoning for this though is not only that they not easy to find other than in certain Archives Offices, but also because people just aren't aware the valuable information they contain.

Police Gazettes are a unique, useful and extremely fascinating resource for historians and researchers. They were compiled to be distributed amongst the Police Force only, and therefore contain details and information that can not be found anywhere else.

This CD-ROM is a compilation of all 52 issues of the South Australia Police Gazette that were issued during 1889. Each issue is usually three or four pages long, and contains information such as court lists, lists of warrants issued, appointments and changes in the Police Service, lists of arrests and discharges (which include personal descriptions), escaped prisoners, and missing persons. Notices from Police Gazettes from other states are also often included.

Missing Friends
Inquiry is requested for Anna Emilie Daecke, a married woman, who left her home, at St. Kitt's (Kapunda), where her husband is farming, on the morning of the 22nd instant, leaving a note stating her intention not to return again; she is of weak mind, and has a brother-in-law living at Albury, N.S.W., to which place it is conjectured she may go. She has so far been traced in the direction of Adelaide. Description-Age 37, height 5ft. 3in., stoutish build, fair complexion, yellowish hair, brown eyes, scattered hairs on face and chin, wearing dirty dark dress and small black hat and veil; was in possession of some £17 cash.-(C.1188)