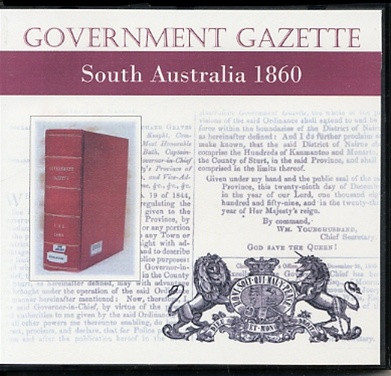 Search for any number of names or places easily. Reconstruct events and circumstances in the lives of individuals and communities.

Some features of this years issues:

SAMPLE ENTRY (from the 17 May 1860 issue):[note, only a portion has been extracted for this sample]

ADJUDICATIONS In the Court of Insolvency, South Australia
Whereas adjudication in insolvency have been made against the undermentioned persons ... At the first of which meeting the insolvents are required to surrender and make disclosures of their estates and effects, and the creditors are to come prepared to proved their debts ...

A vast resource of information, this 1100+ page volume containing all issues released during 1860 has been digitally scanned, made searchable, bookmarked for ease of use, and is now available for all historians to easily access.