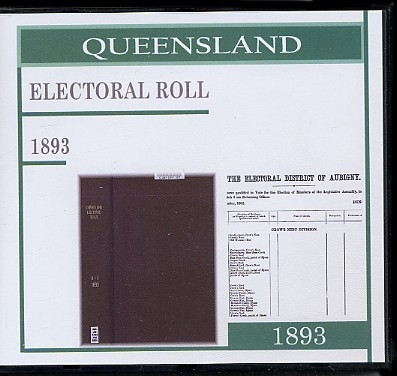 Electoral Rolls are the nearest thing Australians have to census records, at least at the end of the nineteenth and start of the twentieth century, and hence, they are both extremely important and useful for local, family and social historians.

The electoral book for 1893, which has 1001 pages, is divided into the electoral districts of Queensland  only those for Districts A-F are available on this CD. Arranged alphabetically by district you will find the details of about 40,000 men who resided in Queensland in this era, and who were qualified (and registered) to vote.

In the 19th century, any male aged 21 years or over, who occupied a house, warehouse or shop, who earned £25 per year or more, or who had held a miners licence for six months, was entitled to vote. However, people in some occupations, including the police, military and naval services were ineligible to vote. Persons who owned property in several different electoral divisions were entitled to vote in each. Women in Queensland were not given the right to vote until 1905, so they are not included in this electoral roll.

The following information is included for many (but not all) entries:Christian Name and Surname

This product contains high quality scanned images of the original rolls. It has been bookmarked for easy navigation. Pages can be searched, browsed, enlarged and printed out if required.