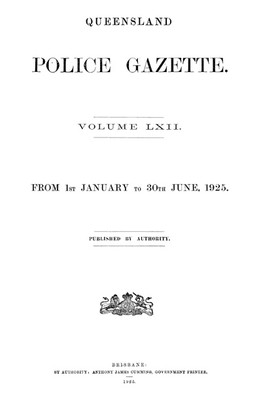 Police Gazettes are a unique, useful and extremely fascinating resource for local, family and social historians and researchers in other fields throughout Australia. Compiled to be distributed amongst the police force only, these Gazettes therefore contain details and information that can not be found anywhere else.

A goldmine of information for any historian, the Police Gazettes contain a wide range of information such as lists of warrants issued, details of those arrested and discharged (which include physical descriptions of the offender), escaped prisoners (also with descriptions), details of those deserting their wives and families, missing friends, deserters from employers, lists of cars and bicycles stolen. You will also find details on murders, robberies, arson, sacrilege and more. Notices from Police Gazettes from other states are also often included.

Warrants Issued
Commissioner's Office - Warrants have been issued by the Dunedin (New Zealand) Bench for the arrest of Frank Gorton (name probably ficticious), on the following charges: (1) On 17th June, 1925, at Dunedin, did obtain from one John George Wregglesworth the sum of £150 by falsely pretending that he was conduction a business for the manufacture of woollen dusters and desired a partner, (2) on or about the 17th June, 1925 at Dunedin, did commit theft of £150, the property of John George Wregglesworth. Description: 37 years of age, about 15 stone weight, fresh complexion, fair curly hair (brushed back) clean shaven, square features; dresses in a grey suit, grey tweed overcoat, light-coloured soft felt hat, tan shoes with pointed toes; may be identical with Henry J. Cutting, whose photograph appears in "Victoria Police Gazette" 1921, page 31, he may be accompanied by a women, believed to be his wife, aged 28 years o age, 5 feet 6 inches high, thin build, sallow complexion, dark hair, fawn-coloured dress, fawn tweed coat. Arrest desired.

Wife and Child Deserters
Roma Street, Brisbane - The above in a photograph (taken sixteen years ago, now fuller in face) of Lachlan John Macpherson, against whom a summons has been issued for disobeying an order of the court for the maintenance of his wife, Sarah Helen Macpherson (amount due £18). Description: 47 years of age, 5 feet 9 3/4 inches high, proportionate build, sallow complexion, dark hazel eyes, scar on third finger right hand, eyebrows meet.

Useful for all who had family in Queensland during this time ... you just never know what you might find.

High quality scanned images of the whole years worth of issues.This CD has been bookmarked for easy navigation, and pages can be searched, browsed, enlarged and printed out if required.