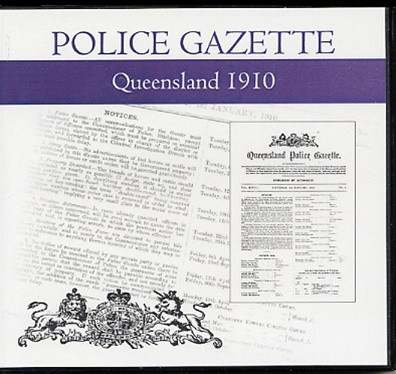 What information can be found in a Queensland Police Gazette?
The information contained in the Police Gazettes does vary a little from year to year, but overall you will find details of any changes within the police force which are all listed (promotions, demotions, discharges, resignations, deaths), information is also given on housebreak-ins, robberies, arson, murders, deserted seamen, deserters from families, warrants issued, prisoners discharged, missing friends, lost and found items and more. The Queensland edition is a little different from other states in that it includes details of those applying and holding various licences, such as: treasury licences, auctioneers, wine-sellers, wholesale spirit dealers, victuallers and transfer of victuallers licences, billiards, packets and more. Many photographs are also included in this year's issues.

How can this help me?
Anyone researching their family will have a 'lost' family member or two! You may well find them listed here, being on either side of the law. Maybe they were a Policeman who received a promotion, or someone who had something stolen from them. You can find the physical details on persons listed here, missing, wanted or released, which helps to paint a picture of them (name, aliases used, age, height, colour hair, colour eyes, distinguishing features, even colour clothing worn). There are even a few photographs included in these issues.

Warrants Issued
South Townsville - A warrant has been issued by the Townsville Bench for the arrest of J. Aitken, charged with deserting from the s.s. "Mourilyan", at Lucinda Point, on 2nd July, 1910. Offender is 21 years of age, 5 feet high, dark complexion, clean shaved, nuggety build; a seaman; and a native of Liverpool. Supposed to have stowed away on the s.s. "Ourakka".-0.2190. 7th July, 1910.

Miscelleneous
Watchhouse, Brisbane - A warrant has been issued by the Brisbane Bench for the arrest of William Groom Bullock, charged with deserting his illegitimate child by Mary Alice Clark, at Brisbane on 25th June, 1910. Offender is 28 years of age, 5 feet 2 or 3 inches high, sallow complexion, dark-brown hair and moustache, brown eyes, medium build; a grocer; and an Englishman; dressed in a dark coat, white vest, grey trousers, white straw hat, and button boots. Supposed gone to Melbourne.O.2209. 7th July, 1910

This is a vast resource of useful historical information is easily available on fully-searchable CD-ROM for the first time.