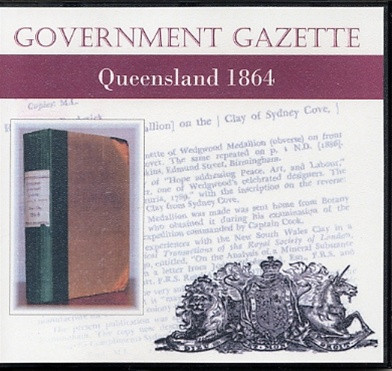 Government Gazettes are a much underused source, partly because of their availability (you would usually only find them select archives offices or libraries), and partly because people don't know about them. Now that Archive CD Books Australia has started releasing them on CD-ROM, everyone has access to this amazing resource.

The Government Gazettes were weekly newspapers (although there were extra issues produced as well), and this CD contains all issues that were released for the year 1864. Full of fascinating information, both historical and genealogical, youf will find information such as government notices, public works notices, land sales, tenders notices, and mining by-laws, as well as stock impound listings, court notices, police sales, unclaimed letters lists, patent applications, dissolution of business partnerships, private advertisements (many of which include lost or stolen property with rewards) and more. So if you've got an interesting in Queensland during this period - you're bound to find something of interest.

General Post Office
Brisbane, 16th July 1864
It is notified for the information of the Public, that on and after the 1st instant, the Postage on Letters despatched per Mail Steamers from the United Kingdom to the Australian Colonies, via Southampton, has been raised to One Shilling the half-ounces, and via Marseilles, to One Shilling and four-pence. The rate of Postage on Letters despatched by private vessels direct, has been reduced to Four-pence the half-ounce.
Thos. L. Murray Prior, Postmaster-General

To Stockholders
Owners of cattle, branded LR conjoined (the L reversed) off rump, and 7 off shoulder are hereby informed that some of their cattle are now running upon our stations; we wish them removed without delay.
Hunt and Johnson
Baroondah, Taroom, 3rd September 1864