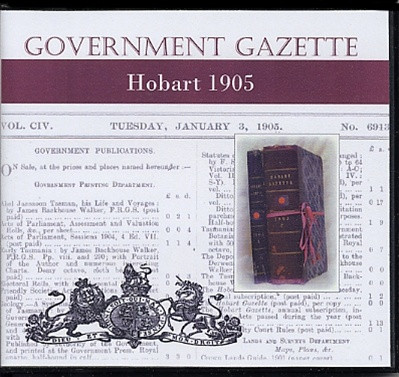 Government Gazettes are a unique, useful and extremely fascinating resource for local, family and social historians and researchers in other fields
throughout Australia. They are published by governments and their agencies as a means of communication to officials and to the general public.

Gazettes contain a vast range of valuable and interesting content such as the following:

Licensing Bench Notice - George Town Licensing District
Notice is hereby given that Messrs. T.H. Simpson, (Government nominee, Chairman), J.  Anderson, R. Darby, R.J. Harris, and J.T. Stubs, were elected as Members of the Licensing Bench for the District of George Town for the year 1905.
Dated this 25th day of January, 1905
Thos. Clifton, Clerk of Petty Sessions.
Bankruptcy NoticesIn the Bankruptcy Court, Launceston
In the matter of proceedings for liquidation by arrangement of composition with creditors instituted by Henry Joseph Carter, of Evandale, In Tasmania, Contractor.
Notice is hereby given that a First General Meeting of the creditors of the abovenamed person has been summoned to be held at the Offices of Messieurs Law & Weston & Archer, No. 1 Mutual Provident Chambers, Cameron-street, Launceston, on Friday, the seventeenth day of February, one thousand nine hundred and five, at three o'clock in the afternoon precisely.
Dated this second day of February, 1905.
Law & Weston & Archer
Attorneys for the said H.J. Carter.