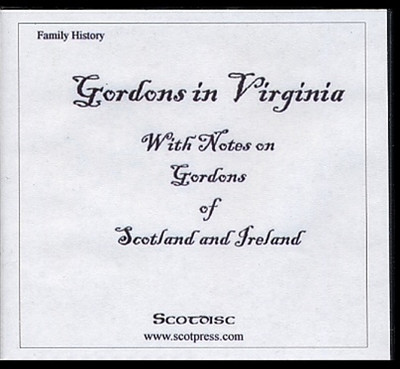 Gordons in Virginia: With Notes on Gordons of Scotland and Ireland

This is a detailed genealogical account of members of the House of Gordon in Virginia, up to the beginning of the 20th century. According to the author, "most of the Virginia families ... had their origins among the Southern Gordons of Galloway and the territory along the Scottish Border. The two notable exceptions are those of Lancaster and of Middlesex and Richmond Counties, who came through Ireland from Morayshire in the North of Scotland to Virginia, and those of Spottsylvania County, who claim to an origin in the Highlands of Scotland."

The main branches chronicled here are the lines of Colonel James Gordon, of Lancaster County, and his brother, John Gordon, of Middlesex County, descendants of James Gordon, the first, of Sheepbridge, in County Down, son of the Reverend James Gordon, a Scotsman, who went to Ulster in 1641 as Chaplain in Lord Montgomery's regiment.

There is a wealth of family history here, with branches of the family throughout Virginia and beyond.