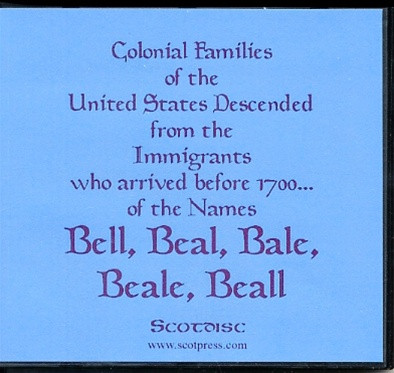 The full title of this work written by Lt. Col. Fielder M. M. Beall is: "Colonial Families of the United States Descended from the Immigrants Who Arrived Before 1700, Mostly from England and Scotland, and Who Are Now Represented by Citizens of the Following Names: Bell, Beal, Bale, Beale, Beall".

Consisting of 297 pages, this book is directed primarily or exclusively to the genealogist seeking information on the families of Bell, Beal, Bale, Beale, Beall. There is a short introduction discussing the origin of the name in Scotland and giving a short history of Scotland down to the 16th century, when the Bell name first is included among those unruly clans of the West Marches. The author then turns to the first Bells who settled in the American colonies, giving a history of the colonies which they inhabited. There is as well a section on the various arms held by individual Bells and where they lived in Britain. The vast majority of the book deals with particular lines of Bells who settled in the colonies, providing information not only on the first member of the family to be identified in the colonies and his or her accomplishments, but also a lengthy account of descendants down through the 19th century and into the 20th.