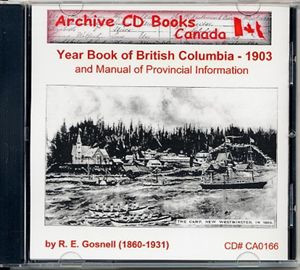 According to its introduction this is either the second or the third publication in this series depending if you consider the addition of a 1901 updating appendix to the 1897 original to be a second edition or not. Whatever edition it is, it remains one of the most detailed and informative sources of information about life in British Columbia (Canada) 100+ years ago.

It is a difficult book to describe in a few words because of the breadth and depth of its subject matter. Perhaps a listing of the major headings from it's contents list might help: Introduction, Physical Characteristics, Agriculture, Mining in British Columbia, The Fisheries, Forest Wealth, Educational, Provincial Health Laws, Taxation and Assessment, Municipal, Our Indians, Towns and Cities, Census of British Columbia, Railway Enterprise, Game of British Columbia, Labour and Wages, Political Information, Trade and Navigation Statistics.