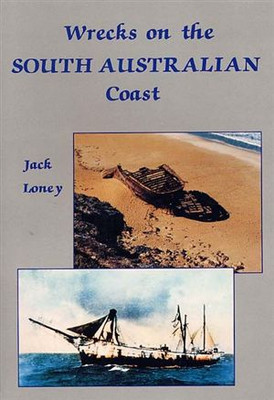 Wrecks on the South Australian Coast: Including Kangaroo Island

Wrecks on the South Australian Coast' is the third in the series of revised and updated reprints of maritime history books which have proved popular with shipwreck enthusiasts and sea lovers.

Here, within the compass of a few pages are dramatically recorded brief stories of disasters which struck ships along the coastline of South Australia, long recognised as one of the most hostile in Australian waters.

From the earliest times when Aborigines presented a serious threat to shipwreck sailors, through the mid 1800s in a period of intense inter-colonial trade and overseas migration, up to the present day, variances in sea and weather have unites to destroy scores of ships and lives.

This carefully researched book, set against a background of early settlement and development is well supplemented by a unique collection of photographs and illustrations, making it one of interest to readers both young and old.