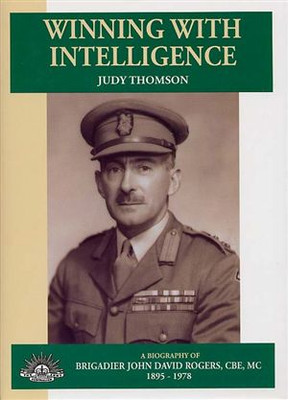 'Winning with Intelligence' is a military biography of Brigadier John Rogers, CBE, MC, who rose from infantry private in the First World War to brigadier and Director of Military Intelligence between 1942 and 1945.

Serving under such formidable commanders as Monash, Blamey, MacArthur and Mountbatten, Rogers' story highlights wartime difficulties that arose for Australian political and military leaders - the junior partners among powerful allies.

Surviving the Gallipoli campaign in the 6th Battalion, Rogers was appointed its Intelligence Officer and was with them at Pozieres. He went on to serve at Passchendaele as a brigade intelligence officer. He was on Monash's staff for the decisive battles of Hamel in July and Germany's 'Black Day', 8 August 1918.

Returning to civilian life and eventual management appointments with an oil company, he further developed his skills in training and management.

In the Second World War, General Blamey asked him 'to take on intelligence', and he served in the Middle East, the Western Desert, Greece and Syria before being ordered home.

In Australia he had to organise the many facets of intelligence-gathering to understand the capabilities of the Japanese, a relatively unknown and crafty enemy. The lead Rogers gave to Australian intelligence, is shown in the successful outcome of those operations for which intelligence, was often a deciding factor.

At war's end, Rogers again returned to civilian life and a senior role in the business world. He never forgot those soldiers with whom he had served.

Now that the silence enforced by Secrecy Regulations is over, Rogers' story can be told. It shows how wars are won or lost through intelligence.

Contents:
Maps and Sketches
Illustrations
Acknowledgements
Introduction
1. Early Days
2. Off to War
3. Gallipoli
4. Lemnos, the Desert and on to France
5. Ypres, Leave, them back to the Somme
6. Red Tabs
8. The Years Between the Wars
9. Off to War Again
10. The Western Desert
11. Greece and Crete
12. The Syrian Story
13. Getting our Intelligence House in Order
14. A Testing Time
15. Diverse Challenges 1943
16. 1944 - Winning the Intelligence War
17. Victory at Last
18. Surrender, Postwar and Thereafter
Appendix 1: Abbreviations and Conversions
Appendix 2: Intelligence Organisations Letter
Appendix 3: Recommendations for Awards
Bibliography
Index