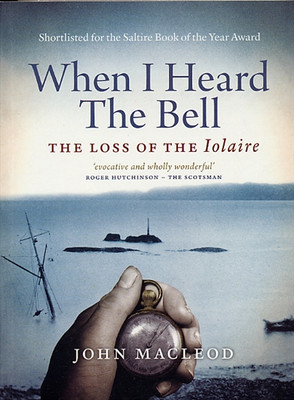 When I Heard the Bell: The Loss of the 'Iolaire'

The war was over, and on 31 December 1918, hours from the first New Year of peace, hundreds of Royal Navy Reservists from the Western Isles poured off successive trains onto the quayside at Kyle of Lochalsh. A chaotic Admiralty had made no adequate arrangements for their safe journey home, and that evening the recently requisitioned steam yacht MHY "Iolaire" set sail for Stornoway, grossly overloaded and with life-belts for less than a third for all on board. She never made it.

At two in the morning, in pitch-black and stormy conditions, the steamer piled onto rocks only yards from the harbour entrance and just half a mile from Stornoway pier, where friends and relatives eagerly awaited the return of their heroes.

Over 200 men drowned, at least 181 of them natives of Lewis and Harris - men who had come through all the alarms and dangers of the First World War only to die on their own doorstep.

The loss of the "Iolaire" remains the worst peacetime British disaster at sea since the sinking of the "Titanic". Yet, beyond the Western Isles, few have ever heard of what is not only one of the cruellest events in our history but an extraordinary maritime puzzle - a tale not only of bureaucrats in a hurry, unfathonable Naval incompetence and abiding, official contempt for the lives of Highlanders, but of individual heroism, astonishing escapes, heart-rending anecdote and the resilience and faith of a remarkable people.

Part 1: Loss
1. The Dark Ship: The Continued Resonance of an Unique Disaster
2. Tolsta 1917: Life and Work on Lewis During the Great War
3. 'A Happy New Year, Commander Mason': A Muddle, a Ship and a Voyage
4. The Beasts of Holm: The Wreck of HMY 'Iolaire'

Part 2: Legacy
5. Grief Unutterable': The Desolation of an Island
6. 'Searching and Impartial Inquiry: The Quest for Answers - and Excuses
7. 'My Heart is so Full of Him - and My Loss of him is so Great': Charity and Misery, Widows and Orphans
8. Dead Reckoning: Remembering, Explaining
'Banntrach Cogaidh' - Am t-Urr Iain MacLeoid (Rev. John MacLeod)
Appendix 1. Charts
Appendix 2. The Ship
Appendix 3. The Lost and the Saved, 1 January 1919
Sources
Acknowledgements