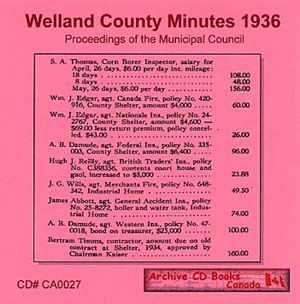 Consisting of five separate session reports it is a compilation of various departmental reports, financial records and reprints of letters received by the council. The councillors and officials of the council are listed as are many from the villages and townships in the county. It also includes a list of all the Wardens who held office since 1856.

There is even a letter from a gentleman, giving notice that he intends to sue the council for the damages caused to his automobile by the poor state of repair of a particular road. Nothing changes!

The December report lists all the people who have bought various licenses to permit them to conduct their trade including Auctioneers, Junk and Second Hand Dealers and Poultry Transportation Permits.

There are also accounts of all the councils expenses identifying what was purchased, who they bought it from and how much was paid.

If you had relatives living in Welland County in this period and if they had any dealings with the Council their name may well appear in this book. If you simply want to know what life was like for the inhabitants the many reports will give you a real insight. One interesting thing I happened to notice was that a new Ford truck cost $575 while a new typewriter cost $150 [note: these are quoting Canadian dollars]!