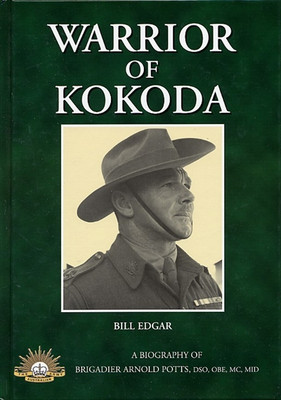 Warrior of Kokoda: A Biography of Brigadier Arnold Potts

This is the story of Brigadier Arnold Potts, a Great War and World War Two hero, a country farmer from Western Australia who led the Australian 21st Infantry Brigade in crucial engagements against the Japanese forces in Paupa in 1942.

He organised and inspired his outnumbered and out-gunned men to conduct a three-week-long fighting withdrawal back along the Kokoda Track. The Japanese force was eventually fought to a standstill on Ioribaiwa Ridge.

Instead of receiving the accolades of his superiors and the thanks of a nation, Potts was ignominiously removed from his command and sent to the 23rd Brigade at Adelaide River, south of Darwin.

Many veterans of the Kokoda campaign regard Potts' dismissal as a disgrace and an attempt to cover up the inadequacies of MacArthur and Blamey.

Contents:
Abbreviations
Maps
Illustrations
Preface
Prologue: Reivers' Road
1. Metamorphosis
2. Boy Sergeant
3. The Western Front
4. 'Barrule'
5. Hurry Up and Wait
6. A Pat on the Head
7. A Woman I Have Known
8. The Country's a Heartbreak
9. Just a Hard Slog
10. Still Smiling
11. Scapegoat?
12. Not Quite Quite
13. Paying Penance
14. Never Trust Wars to Generals
15. A Shining Light
Epilogue
Politics and the Military
Notes
Bibliography
Index