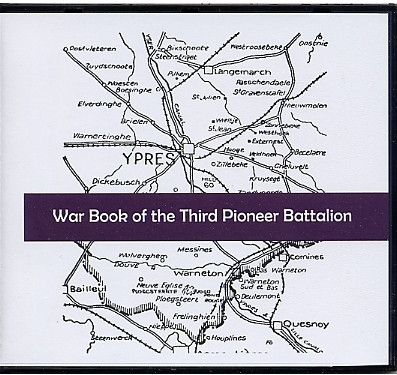 Written in 1922 by Major M.B.B. Keatinge this book traces the Third Pioneer Battalion from its formation, training at Campbellfield in Victoria, its time in England and then at the battlefields in France - at Armentieres, Messines, Ypres, Villers Brettoneux and other areas.

It includes a nominal roll which gives regimental number, rank, date of enlistment, and nature of casualty (where relevant) for each of those who served in the battalion. Also included are Honours and Awards received by its members and an Honour Roll covering those killed in action, died of wounds and died of illness.

There are a number of black and white illustrations and four maps. This CD contains high quality scanned images of the original book, and has been bookmarked for easy navigation. Pages can be searched, browsed, enlarged and printed out if required.