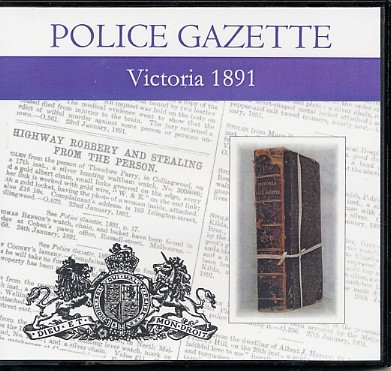 Are you aware that Police Gazettes are a unique, useful, fascinating resource, and they contain a goldmine of information for local, family and social historians? They were compiled to be distributed amongst the Police Force only, and as such, contain details and information that can not be found anywhere else.

While they do include listings of those in the Police Force who have been appointed, discharged, resigned or died, they contain so much more such as:

Usually issued weekly, here collected together on the one CD is all 52 issues released during 1891. Features of the 1891 volume are the lists of auctioneer licence holders.

Some example entries are:
Miscellaneous Information - 7 January 1891
The manager of Wirth's Circus, having applied for permission to perform in Victoria, has been informed that there is no legal provision for the issue of travelling licences in this colony, but that the police will not interfere with his entertainment so long as it is conducted with due regard to public safety and morality, and with the consent of the local municipal authorities.

Miscellaneous Information - 25 June 1891
A warrant commitment has been issued by the Kyneton Bench against Nickles Marhoni for 3 days' imprisonment, in default of payment of 10s fine, for a breach of the Hawker and Pedlers Act. Descriptions: Assyrian, hawker, 35 to 40 years of age, 5 feet high, stout build, round shoulders, dark moustache, large eyes, tooth out or broken in front; wore dark coat, dark-coloured moleskin trousers, and black boxer hat. Carried a portmanteau 18 inches long and the usual box and wares of a hawker. He was fined for not having his name on his packs. His licence was issued in Geelong.-O.2332. 19th March, 1891.