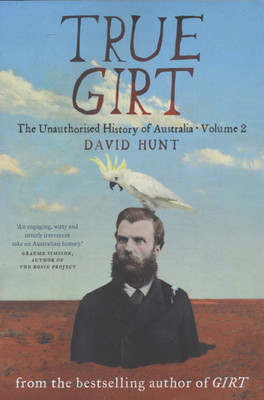 In this side-splitting sequel to his best-selling history, David Hunt transports us to the Australian frontier. This was the Wild South, home to hardy pioneers, gun-slinging bushrangers, directionally challenged explorers, nervous Indigenous people, Caroline Chisholm and sheep. Lots of sheep.

Learn how Truganini's death inspired the Martian invasion of Earth. Discover the role of Hall and Oates in the Myall Creek Massacre. And be reminded why you should never ever smoke with the Wild Colonial Boy and Mad Dan Morgan.

Contents:
Introduction
1. Notes from a small island
2. Down and out in Hobart and Risdon
3. The man in black
4. Genocide is painless
- Coda
5. The People's Poet
- Postscript for MacArthur
6. Batman begins Melbourne (and other stories)
7. Faith, Frauds and Frontier Justice
8. The new colossus
9. We've golden soil
10. Under the Southern Cross I stand
11. Across Australia by bath
12. A widow's son outlawed
13. Such is life
Acknowledgements
Index