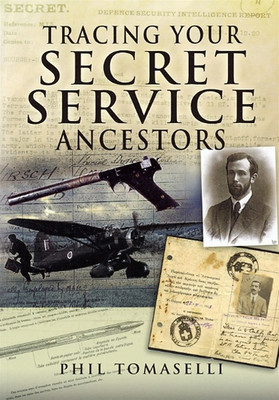 Did you have a spy in the family, an ancestor who was involved in espionage at home or abroad? If you have ever had any suspicions about the secret activities of your relatives, or are curious about the long hidden history of Britain's secret services and those who service in them, this is the book for you.

Phil Tomaselli's fascinating guide to over 100 years of British spies and spying take the reader on a journey through the twilight world of the secret intelligence organisations Britain has run since the Victorian period to the modern day, and it shows where their records can be found.

He looks not only at the two princial services MI5 and MI6, but at every branch of naval, military and air intelligence. He includes Special Branch, PMS2, Indian Political Intelligence, SS1 and SS2, SIME, SOE, Bletchley Park and many other organisations, great and small, that have playes a clandestine role in maintaining national security.

Though many records have been lost, deliberately destroyed or will never be released, enough material is available to give a detailed picture of secret service personnel, the jobs they did and the organisations they worked for. Phil Tomaselli provides tips on how to identify and interpret secret service documents and how to understand them in the context of the time they were written.