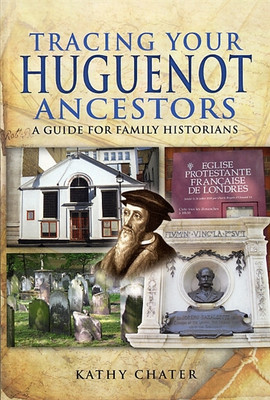 Tracing Your Huguenot Ancestors: A Guide for Family Historians

Between the sixteenth and eighteenth centuries, many thousands of Protestants fled religious persecution in France and the Low Countries. They became one of the most influential immigrant communities in the countries where they settled, and many families in modern-day Britain will find a Huguenot connection in their past. Kathy Chaters authoritative handbook offers an accessible introduction to Huguenot history and to the many sources that researchers can use to uncover the Huguenot ancestry they may not have realized they had.

She traces the history of the Huguenots; their experience of persecution, and their flight to Britain, North America, the West Indies and South Africa, concentrating on the Huguenot communities that settled in England, Ireland, Scotland and the Channel Islands. Her work is also an invaluable guide to the various sources researchers can turn to in order to track their Huguenot ancestors, for she describes the wide range of records that is available in local, regional and national archives, as well as through the internet and overseas.

Her expert overview is essential reading for anyone studying their Huguenot ancestry or immigrant history in Britain.