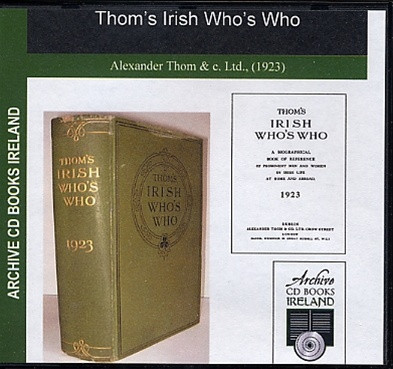 Alexander Thom & Co., almost exclusively know for their 'Dublin City & County Directories', made a brief venture into biographical notices. This was Thom's first edition of their 'Irish Who's Who', which was published in 1923, only two brief years after the creation of the Irish Free State and barely a year after the cessation of Civil War in Ireland.

This edition containing some 280 printed pages and the 'life sketches' of more than 2,500 Irish men and women, who whether residing in Ireland or overseas, were in the words of the publishers 'conspicuous in the Nation's History, and includes leaders of thought and action in all fields of enlightenment and civilization'. In the publishers opinion the notices contained in the first 'Irish Who's Who' would appeal most immediately to the 'Statesman, the Man of Letters, the Clergyman, the Artist, the Journalist, the Lawyer, the Scientist, and last but in many respects first, the Man of Commerce'. While Thom's may have hoped that the latter class would purchase this publication in their droves only a handful of the so-called 'men of commerce' made their way into the Who's Who of Ireland.

This fully-searchable CD-Rom copy of the first edition of Thom's Irish Who's Who was formerly the possession of T. P. Gill and includes a monographed letter from Gill dated 16th October 1930, at which time this book must have still been owned by him. Gill was himself included in publication and his entry is indicative of the type of biographical material provided: Thomas Patrick Gill, Secretary of the Department of Agriculture and Technical Instruction for Ireland; Commissioner for Intermediate Education, Senator of the National University of Ireland, 1910-14; Born Ballygraigue, Nenagh, Co. Tipperary, 25th October 1858, the son of Robert Gill, a civil engineer. Educated Trinity College, Dublin. Editor of the Catholic World Magazine of New York, associate editor of the North American Review and Member of Parliament for South Louth, 1885-92, and numerous other accreditations are also given.

Published two years after independence and the year after the end of the Civil War in Ireland, unsurprisingly this Irish Who's Who does not always follow the conventions for publications of this type, namely the person noticed has to be living at the time of publication. A number of politicians and individuals essential in bringing the Irish state into being are noticed, for example Michael Collins, who was assassinated in 1922 and dead prior to the publication going to press, Eamon De Valera and William Cosgrave to name but a few. From the literary world, the like of Francis Robert Millington Synge and William Butler Yeats are noticed, but as yet a giant of Irish literature, James Joyce, was not sufficiently successful to be included in the publication.

For anyone interested in Irish History or biography, this first and unique edition of 'Thom's Irish Who's Who', republished here on fully-searchable CD-ROM, is an essential acquisition.