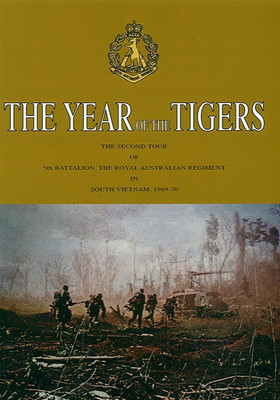 The Year of the Tigers: The Second Tour of 5th Battalion RAR in South Vietnam 1969-70

The Year of the Tiger is a record of the actions and achievements of the 5th Battalion of the Royal Australian Regiment, The Tiger Battalion, during its second tour of duty in the Vietnam War in 1969-70.

This combat infantry battalion, consisting of both Regular soldiers and National Servicemen, was proven to be second-to-none in its 16 main operations over 12 months. It was involved in hundreds of battles with the North Vietnamese Army and Viet Cong enemy and was responsible for the locating, attacking and capturing of literally thousands of enemy defensive bunkers secreted away in the dense jungle or mountain hideaways.

In addition to the battalions constant patrolling, ambushing and fierce jungle battles, it was victorious in the 1969 Battle of Binh Ba when it defeated the 1st Battalion of the 33rd North Vietnamese Regiment, that had occupied this large village located a few thousand metres north of the Australian Task Force base of Nui Dat from house to house was of an intensity rarely equalled during any period of Australias involvement in the Vietnam War. 5 RAR was awarded a Battle Honour for this action.

Essentially a pictorial record, this extensively revised and expanded 3rd edition of a book originally published in 1970 contains a multitude of photographs of the men involved, many contributed by the veterans from previously long-forgotten collections.

These veteran infantrymen were later described by their Commanding Officer, Lieutenant Colonel Colin Genghis Khan in the following way:

These soldiers, as mix of regulars and national servicemen, and their actions epitomised the spirit, loyalty, teamwork, bravery and above all professionalism of the men we officers had the privilege to command in Vietnam