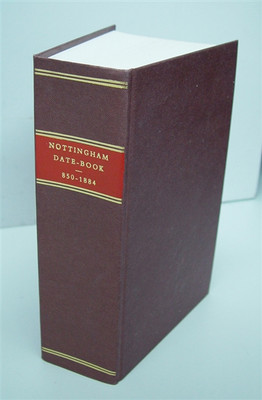 The Nottingham Date Book is fascinating ... it is a book of the history of Nottingham from 850 to 1884. In particular, after about 1750, it is full of references to every-day happenings in the town and its people. Not just important people, but normal people too.

Its is a goldmine of information for not only a social historian learning about the everyday happenings of Nottigham over time, but for the family historian it contains so many references to people, date and every-day events. It is a particularly rare book, and even more so in its complete edition up to 1884.

1619 - On the 12th and 13th of August, this year, the king was again at Nottingham, where he knighted, on the former day, Sir Ralph Hansby, of Lincolnshire, and Sir John Ramsden, of Derbyshire; and on the following day Sir William Balfour and Sir Thomas Barton.

1728 - This year was remarkable for a great flood in the town and district, the like of which had not been known within the memory of people then living, commonly known at the midsummer flood.

1770 - January 13. Thisd day, Saturday, another instance of the little regard entertained by the magistracy for public decency was exhibited in the flagellation of a female, who had been detected in stealing pocket handkerchiefs from a draper's shop. The culprit was a young woman in service with a farmer in the country. She was fastened to a cart, and whipped all the way from the Weekday Cross to the Malt Cross in the Market-place.
1845 - April 16. Died, at Bramcote, in his 70th year, Henry Enfield, Esq. He has been Town Clerk of Nottingham twenty-nine years, and was very highly esteemed in every relationship of life. His son, Mr. William Enfield, was appointed his successor.

This is a limited edition facsimile book, produced by Archive CD Books England. It is numbered 69 of 100 and signed by Rod Neep himself.