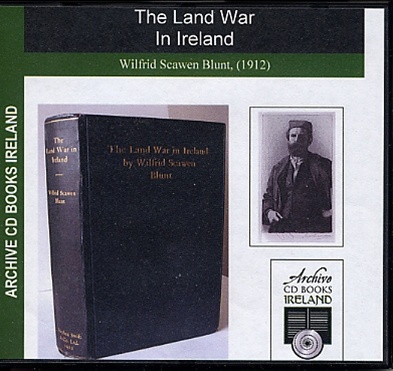 The Land War in Ireland

Originally published in London in 1912 "The Land War in Ireland: Being a Personal Narrative of Events", was considered by the author, Wilfrid Scawen Blunt (1840-1922), as the fourth volume of his Memoirs, the first three of the series being his 'Egyptian Memoirs'.

Wilfrid Scarwn Blunt served in the British Diplomatic Service from 1858 until 1869, when he retired to marry Lady Anne Noel, the daughter of the Earl of Lovelace and granddaughter of Lord Byron. The Blunts embarked together on a series of travels through Spain, Algeria, Egypt and the Syrian desert and purchased a house named Sheykh Obeyd outside of Cairo as well as establishing a successful horse stud named the Crabbett Arabian Stud from which they bred pure-blooded Arabian horses.

During his travels throughout the Arab world Blunt became an ardent sympathiser with Muslim aspirations and in 1882 championed the cause of Urabi Pasha, which he wrote about in The Future of Islam (1882). Philosophically Blunt opposed colonialism and British Imperialism, which was born out after two trips to India, after which he wrote Ideas About India (1885). An opponent of British policy in Sudan and supporter of the National Party in Egypt, Blunt arrived in Ireland in the Spring of 1886 just as the clamour for Land Reform in Ireland became a dominant theme in Irish and British politics, accompanied by his belief in self-government for nations under the colonial yolk.

Never one to sit on the sidelines, Blunt became an active participant in the Land War in Ireland and was also somewhat of a privileged observer, as his diary entries record him dining with amongst others Arthur Balfour, Michael Davitt, Charles Stewart Parnell, William O'Brien, John Dillon and William Gladstone. Throughout the Spring of 1886 until the Summer of 1888 Blunt kept copious notes in his diary about his experiences and observations of the Land War in Ireland as it impacted on the daily lives of the small cottiers of Gweedore, Co. Donegal as well as the strong farmers throughout the midlands. Horrified by the countless murders and reprisals and intrigued by the involvement of the clergy - Blunt was a Catholic, but later renounced affiliation to any religion - Blunt also observed the machinations of the Land War through high politics as Gladstone introduced the first Home Rule Bill to Parliament.

With the permission of William O'Brien and John Dillon, on October 23rd 1887 Blunt intended to hold a Home Rule rally at Woodford, Co. Galway. Although the meeting was proclaimed as illegal, Blunt ignored the proclamation and was duly arrested and charged with resisting arrest and served two-months imprisonment in Loughrea and Kilmainham jails. His experiences of these events and his time in jail and wonderfully expressed both in prose and poetry, for which he was renowned. For anyone interested in the three years of the Land War in Ireland, beginning with the introduction of the first Home Rule Bill and concluding with the divorce trial of Charles Stewart Parnell, 500 or so pages of The Land War in Ireland, written by a sympathetic participant of events is to be heartily recommended.