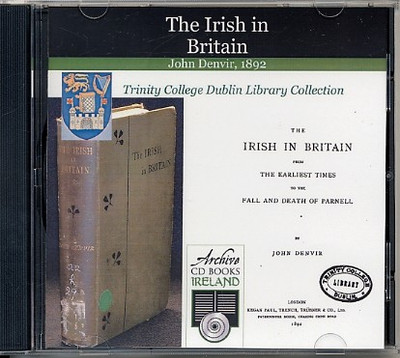 The Irish in Britain

This extraordinary book was published in 1892 by the Liverpool author, journalist and political activist John Denvir. To this day it remains one of the most important sources we have about the nineteenth century Irish, as witnessed by its continued inclusion on university reading lists.

The number of Irish people in Britain grew dramatically in the 1800s, especially in Liverpool. In 1841 over 50,000 Liverpudlians were Irish-born, which had increased to over 70,000 in 1881. These Irish settlers generally came looking for work, or to migrate further to the US but ran out of money. The hardships they experienced were extreme. Denvir had a unique understanding and appreciation of the Irish experience in Britain. Though born in Bushmills, Co. Antrim, he spent his life among the immigrant Irish in Liverpool. He grew up there during the Famine witnessing the horrors of the fleeing victims as they made their way to Liverpool. This had a permanent effect on his political outlook, and Denvir edited and published various Irish interest newspapers like The Irish Programme, The United Irishman and The Nationalist. These newspapers were pointedly political, and he played a leading role in the Irish National League. He had even been an active Fenian for a time.

The first 110 pages details the history of the Irish in Britain before 1800, and is best treated as background reading for the main body of his 462 page book! His coverage of the nineteenth century is quite a different matter. At its heart is an analysis of census figures and other statistical data about the settlement of the Irish in Britain, looking at each individual place that they settled in through time. But what brings his study alive is his own experience of the community, as well as the knowledge he had gained as a journalist over many decades. This is especially valuable when he looks at the experience of the vast majority of the urban Irish poor. He is also detailed about the important development of various Irish political movements in Britain, which he knew well, like the Repeal Movement, Young Ireland, the Fenians, Land League, and British movements with significant Irish involvement like the Chartists.

While Denvir's outlook is clearly political, it also contains a wealth of useful data about this neglected topic. In short it is an essential tool for those studying the Irish in Britain in the 19th century.